What is the Larynx?

Often called the voice box, the larynx is a complex structure of bone, cartilage, and soft tissue located at the top of the trachea or windpipe. It contains three distinct regions.

When air is exhaled against the true vocal cords, they vibrate and create sounds. The greater the air pressure, the louder the sound. Pitch is controlled by the speed of vibration. Since the vocal cords in men are usually thicker and longer than in women, they vibrate more slowly, creating a lower pitch or deeper-sounding voice.

What is a Laryngectomy?

For patients requiring a laryngectomy, the prospect of losing the voice may be the most disturbing element of the operation. The patient often fears the psychological, social and economic impact upon himself or herself and family. Rapid, effective rehabilitation, particularly of speech, can greatly lessen this impact by restoring the patient to his or her full capacity. A laryngectomy is the surgical removal of the larynx. The larynx, also called the voice box, is the organ in the throat that creates speech and, in conjunction with the epiglottis, prevents food from entering the airway during swallowing. It lies between the trachea (windpipe) and the upper part of the airway known as the pharynx, forming part of the tube in the throat that carries air to and from the lungs to create speech, air from the lungs is expelled over the vocal cords in the larynx, resulting in vibrations, which are modified by the tongue, palate and lips. When the larynx is removed, the top of the trachea immediately below the larynx is attached to a permanent opening made in the throat called a stoma. It is through this opening that the laryngectomee breathes. 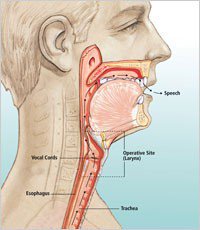 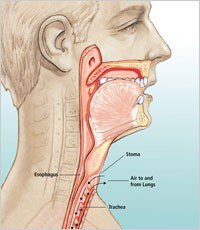 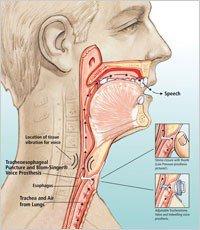 Today, many choices are available to help restore speech. Rapid, effective rehabilitation, particularly speech, is critical to avoid the psychological, social, and economic consequences frequently experienced by the laryngectomee and his/her family.

When the larynx is removed, the top of the trachea immediately below the larynx is attached to a permanent opening made in the throat called a stoma. It is through this opening that the laryngectomee breathes.

With persistence, the laryngectomee can learn from a speech therapist new ways of speaking, either by esophageal speech where air is injected, then expelled in a controlled way to form voice, or by using a speaking aid device known as an electrolarynx where the laryngectomee converts the vibrations to speech.

Today, advances in medical technology enable speech production by means of a voice prosthesis. By creating a small surgical passage (TEP, or Tracheoesophageal Puncture), inside the stoma, from the back wall of the trachea into the esophageal wall, a small one- inched valved tube (voice prosthesis) can be placed into this passage to enable tracheoesophageal speech. Voice is produced by blocking the stoma, either with a finger or an adjustable tracheostoma valve, so that exhaled air from the lungs can be directed from the trachea through the prosthesis into the esophagus (where vibrations are produced) and then out through the mouth. Fluent, conversational speech is usually acquired within a few days.

Information thanks to InHealth Technologies